Lending money to a company?

If you are considering loaning money at zero or low interest to a family member to help them get their new business off the ground, be clever and loan the money to them, not the business. It will save you tax…

Loaning to the company

If you loan money to the company, Hacienda (the tax people) will assume you are receiving a base amount of interest that may be higher than what you really getting, and you will have to pay tax on this assumption.

Why? If you are a close family member of an investor with more than 25% of the shares in the company, then you are a «linked person» (persona vinculada) . This means that any loans you make to the company must, per force, generate interest at the current market rate and you’ll have to declare this income on your personal income tax (IRPF) even if the original loan was interest free.

Although the company can write off the interest payments against corporation tax (thus helping to offset the cost of the IRPF), the benefit accrues to the company and not to you.

And if the loan is greater than 75% of the capital reserves of the company, you’ll have to pay even more tax on the interest generated:

If you loan to your family…

In the case of a zero interest loan, you are better off loaning to your family member, and then they loan the money in turn to their company.

Why? It’s perfectly legal to make an interest free loan between two people and you won’t be liable for assumed interest.

Remember: Since you will be loaning to a family member, not the company, you can’t secure the loan against the assets of the company. You will also have to ensure you do not fall foul of inheritance and donation laws, which are outside the scope of this article. 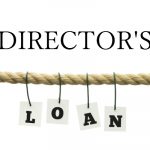 Jim wants to loan his daughter Margaret €200,000 to help get her business off the ground. Margaret’s business has capital reserves of €100,000. Although the loan is interest free, the tax office is likely to assume a 6% interest rate, which is similar to that being offered by high street banks.

If Jim puts the money straight into the company, the following taxes will apply:

If Jim lends the money to Margaret, who in turn makes a director’s loan to her company, the same €12,000 worth of interest is assumed to have been generated for Margaret. But since the total loan is less than three times the worth of her investment in the company, then she is only charged €2,400 on her IRPF.

And since her company can write off €3,000 against corporate tax, she is actually making €600 on the deal!